Feel free to use this page to experiment with the Text Formatting Rules. Just click the “Edit Page” link at the bottom of the page.

You can download a PDF of our membership form in Letter or A4 format.

Please include a check, money order, or credit card information for the appropriate amount. Do not send cash in the mail. Please note that all credit card transactions will be processed in Canadian dollars.

You can email the form back to us by converting the form into a pdf or scanning the completed form. Email back to us as an attachment.

If e-mailing us your form, you can pay via Paypal using their secure services.

Go to Paypal and click Send Money. Enter the following details and the amount you need to pay:

Recipient’s email is paypal@anticipationsf.ca
Category of purchase is Goods (Other)
Subject is Membership Payment
In Note enter your name, address, contact email or telephone, and type of membership

I am putting this here until I get the final OK to go “public” with it.

That’s fine by me, but you realize there’s really nothing stopping you from creating your own private group called Rene or something? If you plan to have many drafts hanging around, it would be a good idea. By default any new groups you create will only be viewable internally.

So…how do you create a group? Guess I’ll ask for a demo when we see each other at the meeting…Rene

You can also purchase a membership through our lay-away plan. Pay the supporting price, then pay an amount on a monthly basis so that you’ve paid the Attending price before June 30th, 2009. The benefit is that when you pay the supporting price you lock in the total you’ll have to pay before the deadline. So even though the Attending price will go up over time, your lay-away total will not.

David G. Hartwell is the author of Age of Wonders and the editor of anthologies including The Dark Descent, The World Treasury of Science Fiction, and two anthologies of the best of Canadian SF, Northern Stars and Northern Suns, co-edited with Glenn Grant, and nearly twenty others co-edited with Kathryn Cramer. He has received the Eaton and World Fantasy Awards, and in 2006 received his first Hugo Award (after 33 nominations). Hartwell is a Senior Editor at Tor/Forge Books and publisher of The New York Review of Science Fiction. Recently he co-edited Year’s Best SF 11 with Kathryn Cramer. He lives in Pleasantville and Westport, New York.

Julie E. Czerneda is an award-winning, best-selling science fiction author and editor, with her first novel published in 1997, A Thousand Words for Stranger, from DAW Books.

A former biologist who studied the evolution of animal behaviour, she began writing professionally in 1985. As a science author and editor, Julie has contributed to over two hundred student and teacher resources used worldwide, in all sciences, math, and career education, from elementary to college. For ten years, she also owned a specialty press, Czerneda Publishing Inc, producing science and special interest publications. She now writes fiction fulltime, with eleven biology-based novels, numerous short stories, and over fifteen anthologies in print.

Her work has won

as well as been three times on the preliminary Nebula ballot. She was a finalist for the Philip K. Dick Award for Distinguished Science Fiction and the John W. Campbell Award for Best New Writer. Active in the community, Julie has judged writing awards (including the Philip K. Dick), conducts writers workshops, provides professional development for science teachers and librarians, consults for Science News, and is a sought-after speaker on scientific literacy. She was acknowledged for her achievements in teaching natural history with the Peel Award of Excellence in Education, and is an Alumni of Honour of the University of Waterloo. In 2009, Julie will be Guest of Honour at the New Zealand National Convention, and Master of Ceremonies for the World Science Fiction Convention in Montreal. 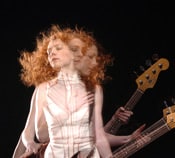